As my wife and I walked around Venice, we kept dreamily thinking of the adventures of James Bond and Vesper Lynd in Casino Royale. (See Venice filming locations) It’s one of our favorite movies, and in my mind, it’s easily the best of the Bond 007 films (I don’t appreciate the older Bond classics like Thunderball).

When we first got to Venice, however, we had come from missing our early morning flight from Paris, and we were not in the best moods. We took a water taxi in because we thought it would be a good experience, but because of the cold and rainy weather (early March) that day, small windows (limited visibility) that were pretty close to water level, and the long wait (not because of long lines, but few boats), this wasn’t a great experience either.

At the end of the trip, we took the bus from Venice to the Airport, and that was a much better, faster, and cheaper experience than the water taxi. Even if it had been summer with gorgeous weather, I would recommend the bus unless you’re staying on the other side of the Venice and would have to walk 30+ minutes to get to your hotel.

We stayed at Domina Home Ca Zusto / Hotel Ca’ Zusto Venezia, a well located 4 star hotel, for three nights for around $100/night. It was definitely the best hotel stay of our Europe trip, with good sized rooms, a solid breakfast, and great support staff.

For our first day in Venice, we essentially slept in after getting lunch. Plus, it was raining pretty hard, and we just needed rest. Two full days ended up being pretty good to appreciate the city, however, even despite the cold (around 10C, 45-55F) and intermittent rain. I’ve seen photos of Venice in the summer, and it is nuts!

If I could do it again, I’d go to Venice slightly later, right around late March / early April so that the weather would be slightly warmer but still without the crowds. That was the big benefit from our visit. There was still a decent amount of people around, but nothing where we’d say things were crowded. We could set up, take photos, and really enjoy the sights without any lines or concerns about pickpockets.

Another benefit of visiting in March? Trying out moeche, or soft-shell crabs, which are only available in the fall or early spring. 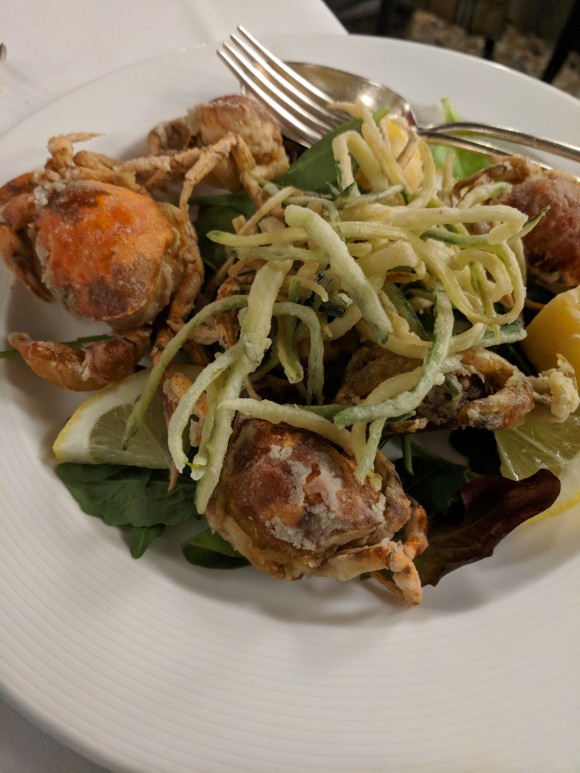 The crabs were great, but the rest of our meal at the highly touted (and easily $70 per person) Osteria alle Testiere was disappointing. The other items we ordered were just okay, but we were left waiting over 25 minutes between appetizers and the next dish. There wasn’t any advance warning, bread in between, or any service. When we asked about the wait, we were told snootily that “this isn’t fast food”.

I’ll talk more about the specific things we did in a bit, but in general, it’s really easy to walk around Venice, but it’s also just as easy to get lost. Even with Google Maps (which got confused all the time) and a map in hand (yes, I can read maps), I felt like I wasn’t sure where I was a quarter of the time. You can take water taxis around the main islands, including Burano and Murano – overall, pretty convenient and quick though I imagine it’s different during the summer.

Tourist maps will show a main path that loops around Venice, taking you through all the main touristy areas, including food and shopping. While we took that path, just to see everything, we also took considerable time off going into random areas, looking for places that locals ate at. Our best meal was at one such place.

See these articles for more on Food:

10 of the best budget restaurants in Venice | Travel | The Guardian

The Best Restaurants In Venice, According To The Locals | HuffPost

The Venice that most tourists miss | Travel | The Guardian

We originally booked Venice more on my wife’s suggestion. I really wasn’t so excited about it, but once I got there, even despite the rain, I took to it quickly. There definitely feels something magical about the place. I don’t have a big need to visit again soon, but I’m glad I made the trip. There’s a feeling that you’re visiting something unique in the world, something with a lot of history and significance, and walking in a town surrounded by water is a bit surreal.

We didn’t go to the Guggenheim (I’m no art lover, but had at least heard of it, and had no idea it was in Venice until the night before we arrived), or do a boat canal serenade (it was cold, expensive -$100-, and as we thought about it, we did not think it would be that great). I’m not a big coffee drinker normally, but I learned about cappuccino vs espresso vs latte. We also had passion fruit tiramisu at I Tre Mercanti; tiramisu arguably has its origins in/around Venice. 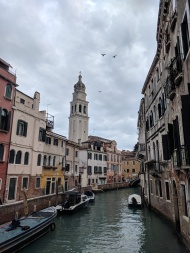 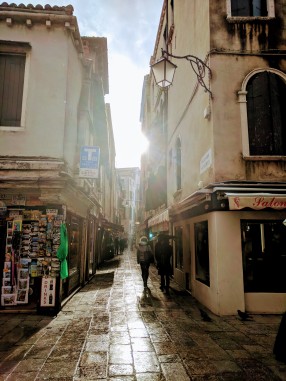 I’d heard that true Italian pizza is like a small piece of cheeze and meat on a cracker. Despite plenty of restaurants touting their authentic Italian pizza, however, they were all like the pizza we had at Antico Forno, American style pizza.

Our favorite meal was in Murano, a ten minute water taxi away from Venice, at La Perla ai Bisatei. This is seafood for the Venetian (in Vietnamese, we’d use the term bình dân). Ha’s second favorite meal was at another local-focused venue, Trattoria Alla Rampa. This is where we discovered other Venetian favorites like Baccalà Mantecato (white fish), spaghetti con nero di seppia (squid ink spaghetti), and Polenta (almost like rice porridge).

During the trip, I also learned about Venezia FC, the local Serie B soccer team. They’ve been moving up steadily after new ownership by an American-Italian owner and might get to Serie A within the next couple of years. A new stadium is planned. I went to Venezia F.C. Rivenditore Ufficiale to buy an official 110th anniversary jersey, getting the baby blue goal keeper shirt along with official Serie B and Respect patches. In talking to the store owner, he mentioned that he hoped the team would get into Serie A after a couple of tries rather than right away in order to build enough of a foundation to stay at the top levels.

For me Burano and Murano are not so special, but walking around them makes you realize how much the Venice area (uh, Merchant of Venice?) is purely a tourism hub today. What was once perhaps the financial hub of the world due to its location between continents is now just a place left by time. I read some articles discussing how locals have been leaving in droves over the last decades; what was formerly a city of 100K is now at 40K .

Burano has colorful houses, which are great for photos, and lace, while Murano is focused on glass-making. These end up feeling like gimmicks to attract tourists, and I think the reality is that there is just nothing else to pivot to. This makes me think of manufacturing jobs and old industry in America; those jobs are better done elsewhere, but are there new jobs, even with training, that can take place of those old jobs? In Burano and Murano, the answer feels like no. 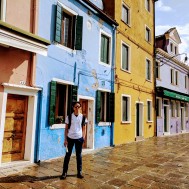 I write whatever I feel like, and often do so foolishly. Opinions here are always my own unless explicitly mentioned otherwise.

Professionally, I am a startup warrior and I hold a MBA from Kellogg (Northwestern). I live in the San Francisco Bay Area (California).