Last weekend, I completed the Tierra Bella Bicycle Tour, organized by the Almaden Cycle Touring Club (ACTC). I achieved new highs in distance (124 miles versus 92), climbing (8825 feet vs somewhere in the 7K range), and paced things fairly well with the help of Best Bike Split.

Above: the official climbing map for my route. I’m not sure why ACTC’s numbers are so different from mine (600+ feet difference in climbing). 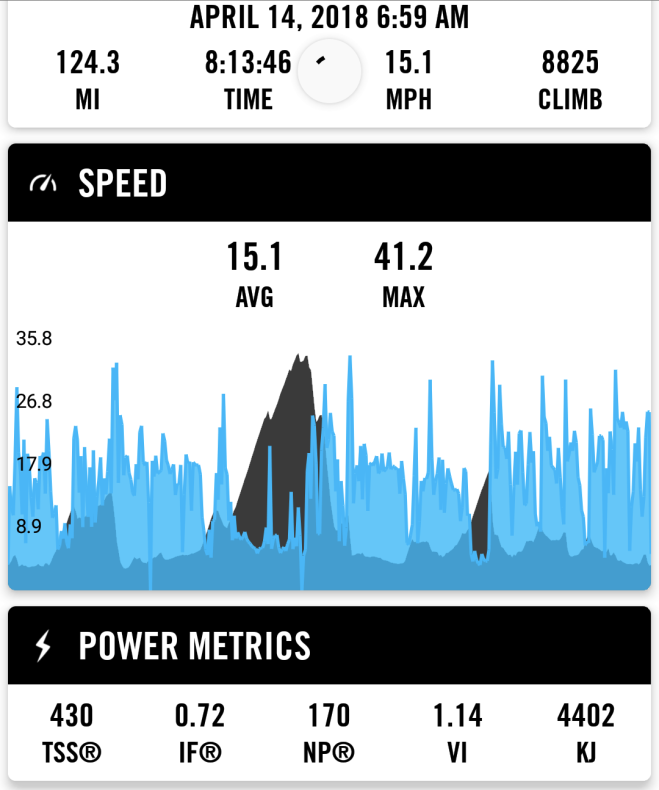 Watts/KG for the ride (in Net Power) came out to around 2.7. Starting right before 7AM, I crossed the finish line around 9 hours later, having spent an hour total at rest stops and traffic lights.

The tour is a great value. It’s fully supported in terms of food, with 6 rest stops and a post-ride meal for the 200KM route (technically, there’s 5 rest stops, but one repeats), and the cost is only $75. If you want to add someone for the post-ride meal (for example, my wife who did not ride), that’s another $10.

$75 is about two-thirds to one half the cost of a normal gran fondo-like event, and if you live in the area (Morgan Hill, Gilroy, San Jose), it’s an easy 30 minute drive to Gavilan College and the start line. I came from Mountain View, which is about an hour away, close enough that I didn’t need to sleep at a hotel overnight, saving further on costs.

While Tierra Bella is a fully supported ride, I’m not sure how they handled mechanical issues. Unlike the Sea Otter Classic Gran Fondo, there doesn’t seem to be support from Velofix, a mobile bike shop, or other support staff driving along the route. Last year at Sea Otter, I ran into two flats within the first ten miles.

Because of this, do not expect any frills (finishing medals, beer, celebratory finish line, photographers to sell you photos, etc.), which was perfectly fine with me. The ACTC staff is super nice and was genuinely fun and encouraging to talk to at the rest stops.

I wasn’t that fond of the route overall. A lot of this might have been that I was familiar with a good chunk because it crosses back into Morgan Hill, an area I’ve ridden quite a bit in the past. I like these big touring events mainly to experience new roads, with new sights. It felt like there were three or four main highlights on the tour, between which you had to criss-cross 15 miles each way to get to them – these “commute” miles felt a bit empty and boring, but again perhaps I felt that way because I knew the roads.

Despite all the heavy climbing, none of the descents were particularly good. The initial descent, the Canada loop, was likely the best, while Henry Coe suffers from poor roads (super jittery on my 25 inch wheels at 90 PSI) and small lanes (someone cracked his one week old carbon handlebar on the descent), and Hicks is just too vertical to enjoy (I had to worry about others struggling uphill wile going down and carefully control my speed).

Nonetheless, considering everything, Tierra Bella is a solid event.

Breakdown of the Ride

I was in bed by 8PM the previous night, but didn’t get very good rest (this has been a lifelong problem when I have to get up early for something important). I was up before 5AM and got to the start location around 6:30AM. There wasn’t a mass start, and so I was off right before 7AM.

See a Strava Flyby comparison of others who did the same route here.

Things were going well after the first 20 miles or so, I was gradually moving past other riders at around 160 watts. I don’t remember much from the Canada Loop, and I skipped the first rest stop. Before the Henry Coe climb, however, I got pulled over by police by skipping a stop sign. I couldn’t protest it at all, and just admitted to the failure. Luckily, I was let off with a warning. I also learned that if I had received a ticket, that would have counted as a moving violation on my (car) driving record.

By the time I got to the second rest stop, I knew it was time to eat and went for some wraps and fruit. The Henry Coe climb was a big pain, however. I hadn’t studied the map beforehand, so the whole course was a big surprise. This is my fault. Henry Coe is a 10 mile climb that lasts over an hour at 3W/KG. I just felt like I was going forever, and I became mentally tired after finishing a mini-crest and then seeing another mile of climbing up ahead. I hadn’t planned on taking the third rest stop, but I wanted the break after such a sustained climb.

Descending from Henry Coe was a bit troublesome as the road pavement quality isn’t very good. I didn’t have to worry about cars much, but I had a jittery ride all the way down and had to constantly look for bumps and potholes.

Making my way from the descent, I crossed over west to Bailey Road in Morgan Hill, enduring a 10 mile flat stretch in a headwind.

I was definitely feeling a bit of fatigue by the time I hit the fourth rest stop, and I really went after the food here, getting Oreos, Gatorade, an instant cup of noodles (first event I’d seen this, but hot soup felt really good in my stomach), and other items. In fact, I overdid it, and was starting to feel stomach cramps shortly after leaving on my way up to Hicks. Thus, I relaxed a bit on the power, and hoped I’d feel ok by the time I needed to make the climb. I noticed I was able to make huge gulps of my Gatorade / Cytomax drink mix, so I was a bit concerned I might be getting dehydrated. At the same time, I started to feel twitchiness from my left calf muscle, as if it were cramping. I’ve only experienced a muscle cramp (in any activity) once in my life, so I wasn’t sure, but this was another sign that I needed to drink more, not push pace, and pedal in a way that would not exacerbate the issue. I was unclear if there was a way to pedal without making it worse, but I was determined to keep going.

I guess the drinks and food all got absorbed in time, because both the stomach and muscle cramps were mostly gone by the time I arrived at Hicks.

Hicks was an evil climb considering my state. It’s only 1.5+ miles but at a 10 degree incline with significant parts over 15 degrees in the heat. I hadn’t felt too bad in terms of heat before this, but once I started going uphill, the air flow died around me and I could feel heat radiating from the ground. I later found out it was 95 degrees on the climb. I felt like I needed to do 3W/KG (200 watts) just to marginally move up the climb and I was scared of standing up because I didn’t know if I’d blow up. If you had read my mind then, you would have heard a lot of cursing.

At this point, I was 85 miles in and I had serious thoughts whether I could finish it.

But I did, and the rest of the ride downhill and back to Gavilan College in Gilroy was pretty much okay from there.

In thinking about future events, I think 125 miles was a bit much. When I finished, my lungs were a bit tired, which I’m not sure I’ve experienced in the past. I think I would have been fine with 10K feet of climbing and 100 miles total distance. At a certain point in a ride, you just want to go home, and I was definitely less enthused about the ride once I finished the Hicks climb (around the 95 mile mark). However, I realize this may have partly been due to the course map, knowing that I wouldn’t be seeing anything new the rest of the ride, and the high heat.